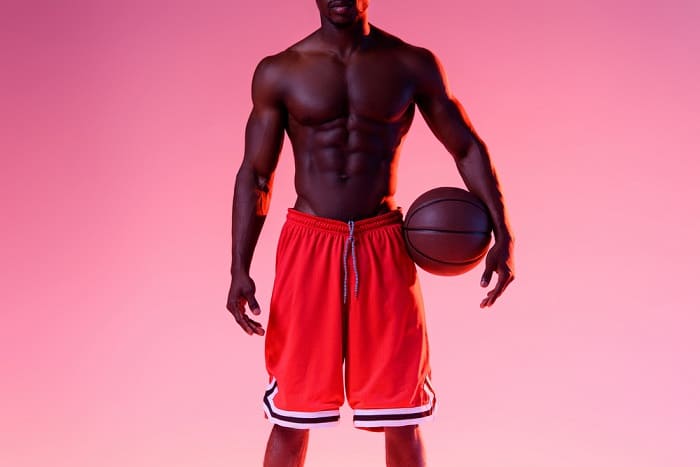 I’m not sure what it is about long basketball shorts, but there’s just something about them that makes a man look like a badass.

Whatever it is, there’s no denying that long basketball shorts make a man look tough. And that’s why I love them.

But is that what it’s all about?

Why are basketball shorts so long in the first place?

Long basketball shorts are a trend created by Michael Jordan. The Michigan “Fab Five” further perpetuated this trend into the mainstream. It wasn’t very long until pop culture took notice and the baggy basketball shorts craze was born.

The history of basketball shorts in the NBA

Basketball shorts have come a long way since the early 1900s. In those days, players wore padded pants instead of shorts!

The NBA didn’t start to wear shorts until the 1920s.

Interestingly enough, the players themselves wanted to make the change. They felt that the extra fabric hindered quick cuts and jumps.

These “short shorts” were quite a bit shorter than what we see today. They barely covered the players’ thighs.

Players like Jerry West, Wilt Chamberlain, and Oscar Robertson are some of the biggest icons for wearing “short shorts.”

The short trend lasted through the ’70s and into the ’80s – that’s when things began to change.

In 1984, a new evolution was about to take the NBA by storm.

We’re talking about the introduction of the long shorts!

Who started long shorts in basketball?

Michael Jordan started wearing long shorts. By doing so, he changed the game of basketball forever.

Some people say that Jordan started wearing long shorts because he was self-conscious about his muscular thighs.

Others say that the loose material gave him more freedom of movement on the court, particularly on defense. He had a habit of continually pulling his shorts down.

There is also a theory that he started wearing long shorts because he wanted to wear his University of North Carolina shorts under his Chicago Bulls shorts. He believed that his UNC shorts were lucky, and he wanted to bring that luck with him to the NBA.

Whatever the reason, Jordan’s influence caused long shorts to become the standard in basketball. And they have been that way ever since.

The University of Michigan Fab Five Made Long Shorts Mainstream

In 1991, the University of Michigan basketball team, also known as the “Fab-Five,” made NCAA history by becoming the first team to wear long baggy shorts on the court.

The Fab-Five became extremely popular due to their unique “bad-boy” style and their exceptional skills on the court. They were young, bold, and unafraid to experiment with their style.

And they rocked some serious shorts!

Check out the “Fab Five” in action here:

Pundits often referred to them as “gangsters” and “thugs” because of their baggy clothes and hip-hop-inspired hairstyles.

Their look was controversial at first, but it quickly caught on and became a fashion trend. Soon, everyone was wearing long shorts.

When did basketball shorts get long?

In 1984, basketball shorts became long thanks to Michael Jordan. He popularized the baggy style that is more accepted today than they were before him!

Most people think that fashion trends develop randomly, without any rhyme or reason. But in reality, there are certain factors that contribute to the development of new fashion trends.

Sports stars have a huge influence on fashion. So it makes complete sense that the G.O.A.T himself (Michael Jordan) would help to popularize the longer basketball shorts trend.

The super-long short trend started to fade around 2010. Nowadays, mid-length and short shorts are seen on the court again.

All in all, this helps us understand the answer to “why are basketball shorts so long?”

Why did they make basketball shorts longer?

The shifting fashion trends drove the change, then the manufacturers created products (with technological improvements) to mirror what the market wanted. Traditionally, basketball players wore their shorts above the knee.

However, many basketball players switched to wearing their shorts below the knee in 90s and early 2000s, which prompted Nike to design a longer version of the basketball shorts.

According to Nike, the new length “provides a better fit and more range of motion.”

Testing determined that athletes preferred more coverage and feel, so designers lengthened the basketball short inseam. As a further read, check out my article “What To Wear When Playing Basketball“.

When did NBA make the shorts longer?

In 1997, the NBA mandated that basketball shorts be at least one inch above the knee. This means they’re no longer limited to small shorts, but they can be longer.

Why are basketball shorts so loose?

Since basketball requires a great deal of movement, athletes need to be comfortable.

In terms of movement, it’s one of the most demanding games globally.

Players must sprint, jump, and change direction quickly. Tight clothing can inhibit movement and cause discomfort. When players squat into a defensive stance, their shorts shouldn’t ride up and limit their movement.

All of that physical activity puts the body through a lot of stress, and restricting clothing can amplify the heat and humidity that the players are already experiencing.

Why are basketball shorts so long? (The influence of hip-hop on the NBA)

Hip-hop star Quavo says, “The NBA is hip-hop, and hip-hop is the NBA.”

The NBA is notorious for its tight dress code and strict regulations.

However, since the 1990s, we have seen an influx of players wearing baggy shorts, a style popularized by hip-hop music.

Players like Allen Iverson and Tracy McGrady began sporting this fashion trend in their games and at post-game press conferences.

Other players such as Carmelo Anthony and LeBron James followed suit.

NBA players are some of the most stylish athletes in all professional sports. They owe this to their love for hip-hop culture and how it has influenced how they dress.

Baggy shorts aren’t the only thing hip-hop has influenced in the NBA.

We have also seen players start to wear their jerseys loose and untucked, as well as donning a variety of hip-hop-style accessories, such as chains, hats, and tattoos.

How long are basketball shorts?

There is no universal length for basketball shorts, as they can vary based on personal preference.

No, baggy shorts are not popular in the NBA anymore. Most players moved away from the long shorts trend and now wear mid-length or short shorts. The majority of players are moving somewhere to the middle.

LeBron James is breaking away from the baggy clothing style of previous eras and placing more emphasis on his professional appearance.

In 2015, he started wearing shorts that showed off powerful thighs and calves- a move that surprised those close to him because it bucks the “long shorts” established trend.

Yes, basketball shorts are becoming shorter. Even Jalen Rose – one of the pioneers of baggy shorts – said the baggy shorts trend “had its run.”

Basketball players have been wearing longer shorts for many years now. But that may all be changing. Shorter basketball shorts are becoming more popular among players.

There are several reasons why shorter basketball shorts are becoming more popular. Here are a few of them:

How Long Do Basketball Shoes Last – A Definitive Answer [2023]

Why is Basketball So Popular in Indiana? (Explained & Solved)