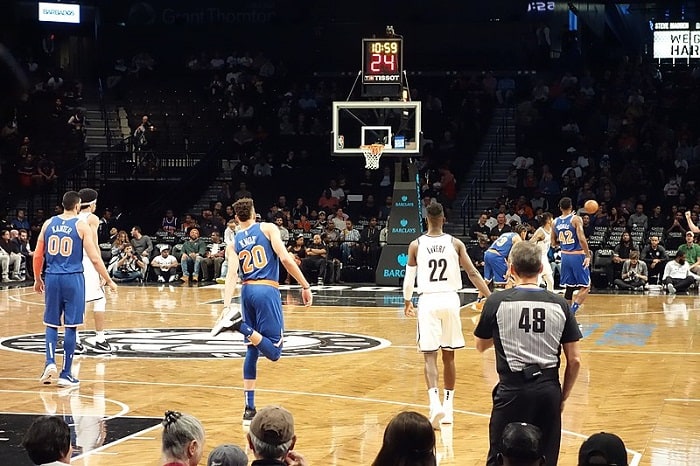 Before every game, you see them.

The players carefully go through their rituals and routines to get them in the zone. Some guys listen to music; others take a few extra jump shots.

NBA players do one pre-game ritual that stands out: wiping their shoes.

It’s a simple act, but it’s essential to every player’s game.

So why do basketball players wipe their shoes?

Why Do Basketball Players Wipe their Shoes?

Basketball is an intense, fast-paced sport where players are constantly in motion, making split-second decisions and staying one step ahead of their opponents.

The best players can change directions quickly and smoothly, making it difficult for defenders to stay with them. They need ample traction, whether crossing a defender, cutting to the basket, or boxing out for a rebound.

That’s why it’s common for players to wipe the bottom of their shoes before each possession.

Removing any dust or debris that accumulates on their soles can ensure they have the best possible traction when they need it most.

Additionally, wiping their shoes also helps keep their hands clean and dry, which is crucial for maintaining a good grip on the ball.

How Does Wiping Shoes Improve Traction?

Wiping your shoes clean before heading out onto the court can improve your traction and, therefore, your performance.

Here’s how it works: dirt and dust build up on the soles of your shoes and get caught in the tiny nooks and crannies of the traction pattern.

When there is debris on the shoe, it can act as a barrier between the shoe and the playing surface, making it more difficult for the player to change direction or come to a stop.

In addition, if the debris is not evenly distributed, it can create uneven pressure points that can cause the shoe to slip.

By wiping the sole of the shoe clean, the player can ensure that no debris could potentially interfere with the traction of the shoe.

Avoiding Injury On The Court

Traction is essential for avoiding injuries on the basketball court (such as ankle sprains) because it helps prevent slips and falls. Basketball is a contact sport, so players are constantly bumping into each other and the floor – you need as much traction as you can get!

Additionally, wearing shoes with solid traction can help stabilize the ankle and knee.

When these joints are stable, they are less likely to be sprained or otherwise injured.

Injuries are unfortunately common in basketball:

In fact, according to a recent study, boys’ basketball had the highest incidence of ankle injury of any sport studied (including football, baseball, or Volleyball).

This is likely because basketball requires quick direction changes and explosive leaping in dense traffic, which puts stress on the ankle joint.

While knee injuries are less common, they contribute to the total time-loss and most devastating long-term effects. When you consider the sport’s constant jumping and planting, it makes sense that the knees would be especially vulnerable.

Many of the league’s most promising young players have cut short careers by knee injuries, including Yao Ming and Grant Hill.

In some cases, these injuries can require surgery and lengthy rehabilitation, making it difficult for even the best players to return to form.

How Wiping Shoes Becomes a Habit (Good or Bad)?

There’s also an element of superstition involved with wiping shoes.

Players have repetitive behaviors that they perform before every game, and some believe that these rituals help them play their best.

For many players (including power forwards), wiping their shoes is simply a habit they’ve gotten into over the years. It’s something they do without thinking about it, and in some cases, it’s become part of their pre-game routine. Josh Hart, for example (who once wore Fortnite shoes during a game) does it quite often.

Or, they might do it before a free-throw attempt or another high-pressure situation to give themselves a psychological edge.

In these moments, it can help to calm the nerves and focus the mind.

I’ve seen players who are so focused on hitting a free throw that they don’t even realize they’re wiping their shoes as they wait for the ball from the referee.

For them, it’s simply a way to release some of the tension they’re feeling at that moment. Whether it’s superstition, habit, or something else entirely, there’s no doubt that wiping your shoes can be helpful in several ways.

Wiping their shoes is a way for players to feel like they’re putting their best foot forward.

How Do You Wipe Basketball Shoes?

There are only two effective methods: using your hands or using a brush. The in-game method is pretty straightforward: take a break from the action and use your hands to wipe the dirt off the soles of your shoes.

The second method is to use a brush in combination with water (or cleaner), either a washcloth or a dedicated shoe brush.

This will remove the dirt more quickly and thoroughly than your hands, but you cannot do it unless you’re on the sidelines.

Are Some Traction Patterns Better for Basketball Than Others?

The best tread pattern for basketball shoes is the herringbone pattern.

Herringbone is a zig-zag pattern that provides traction at different angles, making it easier to stop and start.

The depth of the tread also plays a role in traction – the deeper the tread, the more grip you’ll have. A deep tread is excellent for indoor courts, but a shallow tread is better if you play outdoors.

Shallow treads allow the player to maintain good contact with the ground without picking up too much dirt and debris.

With the right basketball shoes, you’ll be able to move confidently around the court and make all the shots you need to win. Plus, that gives you more stability when you land after vertical jumps.

How Do You Care for Basketball Shoes, so They Keep Their Grip?

Here is how you care for your basketball shoes, so they keep their grip:

No. Players prefer to change shoes every 2-5 games, according to a Denver Nuggets equipment manager. While the average basketball player lets their shoes atrophy, NBA players have to be extra careful about the condition of their shoes. They are running up and down the court for 48 minutes. All that impact can take a toll on even the highest quality sneakers.

Why do basketball players write on their shoes?

Players may use the space to pay tribute to someone or something important in their lives, such as family members or loved ones. Others may use their shoes to commemorate special occasions or celebrate achievements, such as congratulating a friend on a recent victory or marking their mother’s birthday.

Many athletes also use their shoes to make more political statements, expressing support for causes they believe in or commemorating important events in history. For example, Karl Anthony Towns has frequently written messages related to social justice issues on his shoes, and Alex Len has used shoe writing to express his views on war and conflict in Ukraine.

Do basketball players crease their shoes?

Yes.  The torsion and movements inherent in the sport naturally cause the shoes to crease. While some players may take pains to prevent this from happening, others see it as simply part of the game. When you buy a new pair of shoes, the last thing you want is for them to get all wrinkled and creased. Unfortunately, if you’re a basketball player, creases are simply inevitable. After all, creased shoes are a testament to the hours spent perfecting one’s craft on the hardwood.

Why do basketball players lick their shoes?

Many basketball players lick their shoes before taking free throws. While this may seem like a smelly and unsanitary habit, there is a method to the madness. First of all, the player doesn’t lick the shoe directly. Instead, they will lick their fingers, then rub their fingers on the shoe.

Licking one’s shoes provides moisture, which gives the player a better grip on the floor. For one, it can help to keep the shoes from slipping. Some basketball players may also believe that licking their shoes provides them good luck.

Do NBA Players Workout During The Season? [NBA Pro Tells All]