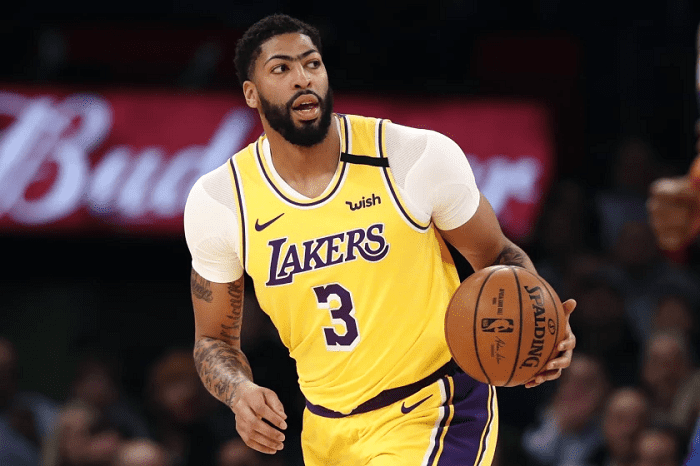 But what can you do?

That’s where the t-shirt comes in!

So, why do basketball players wear shirts under their jerseys?

Read on for more!

Should You Wear a T-shirt Under a Basketball Jersey?

Some players prefer the feeling of air passing through the jersey, while others find that a T-shirt makes them more comfortable.

Ultimately, it is up to the player to choose what’s best for them.

Do NBA Players Wear Anything Under Their Jersey?

However, they cannot wear loose-fitting t-shirts because it violates the NBA dress code.

Watch this video to learn why NBA players wear shirts under their jerseys:

Football players first used compression shirts, but they have become popular among all athletes who participate in high-intensity sports.

NBA players began wearing compression shirts in the early 2000s, and the trend has since caught on.

While the NBA does not require compression shirts, most players choose to wear them for the added benefits.

LeBron James, for example, is a big advocate of compression shirts and wears them whenever he plays. Anthony Davis is another player who frequently wears a compression shirt under his jersey.

A lot of players, including European and Asian top stars, wear rubber bands around their knees to protect themselves from injuries.

Why Does Anthony Davis Wear Shirts Under His Jersey?

Anthony Davis wears compression shirts under his jersey for two reasons: to prevent injuries and to improve his recovery time.

For the majority of his career, Davis wore a shirt under his jersey to protect his muscles and joints from injuries.

In his rookie season, Anthony Davis suffered a torn labrum. Instead of going under the knife, Davis opted to wear a compression shirt under his jersey to prevent further injury.

In an interview with ESPN, Davis said: “It’s really helped me out a lot, just being able to recover faster, being fresh for games.”

Do other NBA players wear shirts under their jerseys?

Yes, many of them do. For example, LeBron James, Kevin Durant, Russell Westbrook, and Chris Paul all wear shirts under their jerseys.

Some players, like Kobe Bryant, have even been known to wear multiple shirts under their jersey for extra protection. This is also a reason for many NBA stars to wear arm sleeves.

Why Do College Basketball Players Wear T-Shirts Under Their Jerseys?

The main reason why college basketball players wear t-shirts under their jerseys is because of the lenient dress code of the NCAA. The NCAA dress code allows players to wear t-shirts as long as they are not revealing and do not have any logos or symbols on them.

This whole tradition started with the dominant Georgetown Hoya Patrick Ewing. Back in the 1980s, when Ewing was playing for Georgetown, the temperature on the court could get pretty cold. So to keep himself warm, Ewing started wearing a t-shirt under his jersey.

“We started playing in these big arenas, and it would be freezing in there,” Ewing said.

Nowadays, you see college players of all ages wearing t-shirts under their jerseys regardless of the temperature. While the main reason is still because of the NCAA dress code, some players say it makes them feel more comfortable and gives them an edge on the competition.

Why Do Basketball Players Wear Vests?

Basketball singlets, also known as vests, are tight-fitting, so they don’t get in the way of the player’s movements.

Players must be able to make quick, agile movements while jumping and running. They also need to jump high and shoot accurately from long distances.

Singlets are made from stretchy, breathable fabric that allows players to move freely and stay cool during intense games.

Wearing a singlet also allows officials to identify players on the court easily. Each player wears a unique number, and the singlet colors help officials keep track of which team each player is on.

Why Do Basketball Players Wear Shirts Under Their Jerseys? Have They Always Worn Them?

The short answer is no. It all started with one man in 1983: Patrick Ewing. The Georgetown center changed the game when he played a game in a T-shirt because he had a cold. Ever since then, basketball players followed suit.

The 7-foot senior has worn a T-shirt under his uniform jersey ever since, and this season the look has even spread to high school teams. It’s not just a style choice – it’s functional too.

As a result, T-shirts have become an essential part of any basketball player’s wardrobe.

Why Do Athletes Wear Undershirts?

The most common reason why athletes wear undershirts is that the undershirt acts as a barrier between the player’s skin and the clothes.

Undershirts are usually made of a stretchy, breathable material like spandex or polyester. They help wick away sweat and keep the player’s skin dry.

This is also important because your clothes can rub against your skin and cause irritation when you’re sweating a lot. And sweating is also related to hair loss.

Why Do Basketball Players Tuck In Their Shirt?

The simple answer is: most referees require all players to have their shirt tucked in during games.

At virtually all levels of play, players must keep their jerseys tucked in at all times or else they will face a violation.

According to NBA rules, if a player’s jersey is untucked as they walk onto the court, it is considered a delay of play infraction. If the infraction is repeated, the opposition will receive a technical foul.

It’s also a sign of professionalism. The player shows that they take the game seriously and want to present themselves in the best light possible by tucking in their shirt.

Additionally, tucking in a shirt can help a player avoid getting caught on something while playing.

If a player’s shirt is hanging out, it’s more likely to get caught on the backboard or on another player’s jersey. Tucking it in helps to prevent this from happening.

What To Wear Under Your Basketball Jersey If You’re a Girl?

Girls should wear the right sports bra and a pair of compression shorts under their jersey.

First and foremost, you want a sports bra that provides good support.

Look for one that has wide straps and a comfortable band. You also want to make sure that the bra is made from breathable material to help keep you cool and dry during the game.

As for shorts, you want a pair that is loose and comfortable. Again, breathability is important, as you don’t want to get too sweaty during the game.

You also want to make sure that the shorts are not too short, as you don’t want to show too much skin. Most basketball shorts are too long, anyway. Finally, make sure that you wear comfortable compression underwear that won’t ride up or chafe during the game.

Why Do NBA Players Wear Shirts On Bench?

NBA players wear shirts on the bench because:

What Do Basketball Players Wear Under Their Shorts?

Jockstraps (also known as “jocks”) can be worn alone, or when pairing them with regular underwear.