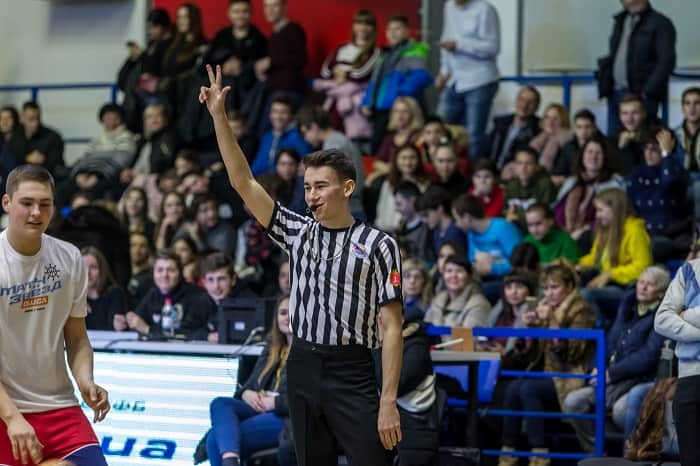 It was the biggest moment of the game.

The crowd was on their feet, and the tension in the air was palpable. Then the referee’s whistle pierced the air, and everyone in the arena fell silent.

The ref called a reach-in foul on the defender, even though he barely touched the offensive player.

So what is a reach-in foul in basketball? What are the rules surrounding this type of foul, and how can players avoid committing one?

Read on to find out!

What Is a Reach in Foul in Basketball (Definition)?

A reach-in foul is a specific personal foul where a defensive player illegally extends his arm(s) or legs into the cylinder of an offensive player to steal the ball or disrupt the shot.

Why Does a Reach-In Foul Occur? (Examples)

Reach in fouls occur when a defender makes contact with the ball handler in the following ways:

Why Do Defenders Reach In for the Ball?

When a defender reaches in for the ball, they try to steal it from the offensive player.

This can be effective if the defender is quick enough to get their hand on the ball before the offensive player thwarts their defensive joust.

Finally, a defender reaches for the ball to affect the offensive player’s shot. They can disrupt the shot and give their team a chance to grab the rebound.

Related resource: “What Does PF Mean In Basketball?”

How To Steal the Ball Without Committing a Reach in Foul?

The best way to steal the ball without committing a reach-in foul is to stay patient and wait for the ball handler to make a mistake.

Good defenders will keep their hands up and their feet moving, but they will also be patient and wait for the right opportunity.

As the ball handler dribbles, watch the offensive player’s body language closely – pay special attention to the trunk of their body so you don’t fall victim to any jukes or ball fakes.

Position your body between the ball handler and the basket and always make him go through your chest.

Make your move as soon as the offensive player gets into a vulnerable position. A defender’s speed, quickness, and timing will give them the best chance to steal the ball before they have a chance to react.

Remember, even with incidental contact, you can still get called for a foul! As long as you grab only the basketball, the steal will be clean!

Here’s an explanatory video to help you understand how to play good defense:

What Are the Penalties for Reaching In (With a Reach-in Foul)?

The official will blow the whistle and call a foul, and two scenarios can occur.

If the offensive attacker is not shooting when the illegal contact occurs, the attacking team will retain possession of the ball, and the defensive team will be penalized with a foul.

As a related read, check out my epic article on the 6 NBA Divisions.

What Does the NBA Rulebook Say About Reaching In?

While the NBA rulebook does not explicitly use the term “reach-in” foul, it clearly states that a personal foul occurs when a defensive player illegally extends his arm into the personal space of the ball handler.

According to the rulebook, a player is allowed to reach in and try and steal the ball as long as they don’t make contact with the opponent’s body.

If a player does make contact with the opponent’s body as they reach for the ball, it is considered a foul, even if the de

This rule protects the player with the ball and prevents potential injuries if two players collide while reaching for the ball. The injury can be serious if one of the players is landing from a vertical jump, for example.

Why Does The Term Reach In Foul In Basketball Exist if It’s Not Officially In The Rulebook?

The term reach in foul is a very well-known and commonly used term among players, coaches, and officials.

A reach-in foul occurs when a defensive player reaches in and makes contact with the attacker in an attempt to steal the ball. It’s more of a casual term that describes the exact play as they see it.

Reaching in is a very common foul, especially among young and inexperienced players. This is because it can be very difficult to steal the ball without making contact with the body of the ball handler.

As players get older and more experienced, they learn how to steal without committing a reach-in foul

Reach-In Fouls: How Often Are They Called?

There isn’t a specific statistic that tracks the number of reach-in fouls in an NBA game, but they are a prevalent type of foul. In general, personal fouls make up a large portion of the total fouls that are called in an NBA game.

Can You Reach In at All in Basketball?

In basketball, you can reach in as long as you do not make illegal contact. So, for example, if you reach in and strip only part of the ball, that is completely legal.

The referees will often make a judgment call on whether or not the contact was illegal. If they decide that it was not illegal, the play will continue.

Typically the best defenders focus on moving their feet and staying in front of their man, rather than reaching in.

Related resource: “What Is A Field Goal In Basketball“.

What Are the Fouls in Basketball?

There are three types of fouls here:

What Is a Reach-In Foul 2k?

A reach-in foul is the same in NBA 2k as in real life. The foul occurs when the defender makes illegal contact with the ball handler, usually by reaching in with their arm or hand.

This frequently happens in the 2k series video game, so most users try to play passing lanes and intercept a pass.

What Is a Reach Around in Basketball?

There are two types of reach around plays in basketball:

How Do You Draw a Reach-In Foul?

The best way to draw a reach-in foul is to put pressure on the defender constantly.

If you’re attacking him and he’s off-balance or uncomfortable, he will resort to fouling if he cannot stay in front of you.

Therefore the best way to draw a reach-in foul is to be relentless on offense and put the defender in a difficult position.

What Is a Loose Ball Foul?

A loose ball foul is a type of foul that can be committed by either an offensive or defensive player. It occurs when a player makes illegal contact with the ball or another player while the ball is not in possession of either team.

What Happens After a Reach-in Foul?

A reach-in foul is when a defender illegally contacts a ball handler, usually by reaching in with their arm or hand. A steal is when a player takes the ball from another player without fouling them. If they dispossess the opponent cleanly, no foul will be called.

What Is the Reach-in Foul Signal?

The reach-in foul signal is when the referee raises one arm in a fist and then grabs his wrist with the opposite arm.

Can Dwight Howard Shoot? The Answer Might Surprise You

How Tall Was James Harden at 15? [A Shocking Answer]