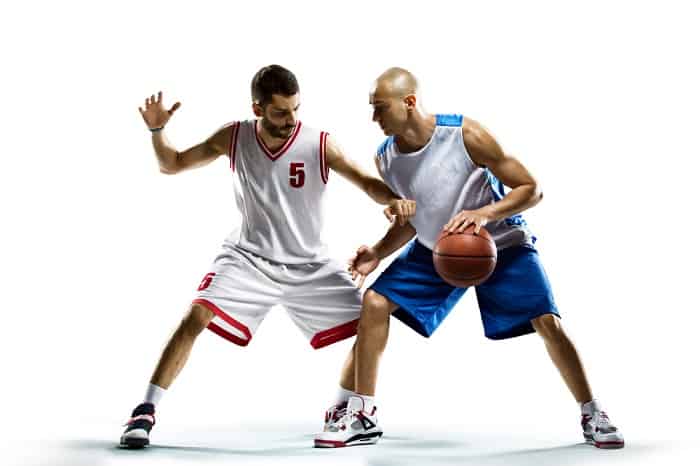 PF. What does it stand for?

As a young hoopster, I was clueless.

My friends would mention it in conversation, and I’d nod my head, pretending to know what they were saying.

It wasn’t until one of my buddies took the time to explain it to me that I finally understood. There are two different meanings, depending on the context.

So, what does PF mean in basketball?

PF stands for Personal Foul, as when a player gets too physical with an opponent. It can also stand for Power Forward, one of the five positions in basketball.

The power forward is typically one of the most prominent players on the team, responsible for “dirty work” down low, such as rebounding and scoring in the paint.

What Does PF Stand for in Basketball?

PF stands for “personal foul” in the world of basketball. This term describes a variety of infractions, including holding, tripping, and elbowing.

Each player is allotted a certain number of personal fouls per game, and once they surpass this limit, they are ejected from the game. A personal foul results from aggressive or rough play on the court that violates the game’s rules.

While personal fouls may seem like a relatively minor infraction, they can significantly impact the game.

First, if a key player commits too many fouls, they will “foul out” from the game, which can completely change the course of the game.

Once a player starts committing fouls early in the game, their coach will remove them from play to preserve their eligibility for the remainder of the game.

So you can imagine, if LeBron James commits too many personal fouls early in the game, he will be forced off the floor and won’t be able to contribute.

But that’s not all. On the flip side of that coin, some players are known for their ability to draw personal fouls, such as LeBron James and James Harden.

Because they are so good at getting into traffic and drawing contact with defenders, they get to the free-throw line more often than other players.

Therefore, these “slasher-type” players get the opposing team into foul trouble.

Meanwhile, they’re able to rack up easy points from the resulting free throws.

Several stats show up on the box score, which is easier to understand. For example, PTS or “points” tells us how many points an individual player has scored during a game.

On the other hand, ASTs or “assists” refers to the passes that lead directly to points or free throws for another player on the team. Some other typical stats in basketball include FGM (Field Goals Made), FG% (shooting percentage), TOs (turnovers), and REBs (rebounds).

Overall, these stats help us better understand how each player contributes to their team’s success on the court.

The “PF” position refers to the power forward in the position context. The power forward is typically one of the taller players on the court, and his primary responsibilities are to rebound and defend the paint.

Offensively, power forwards are often able to score inside the post or from mid-range, but they have also become increasingly adept at shooting from behind the three-point line.

In recent years, the term “Stretch-4” describes power forwards who possess the ability to shoot from long range.

In today’s NBA, long-range shooting is a highly coveted skill, as it stretches out the opposing team’s defense and opens up space for other players on the court.

Players such as Kevin Love and Kristaps Porzingis popularized this style of play from the power forward position. Lamar Odom also played as power forward.

The PF position is evolving, and today there is more emphasis on versatility than ever before. Power forwards are now expected to switch onto smaller, quicker players on defense while handling the ball and making plays on offense.

In short, the modern power forward needs to be a jack of all trades to succeed at the highest level.

Check out this commentary on the evolution of the power forward position:

Tim Duncan and Dirk Nowitzki are two of the best power forwards in recent history.

Duncan, who played for the San Antonio Spurs, was a traditional power forward who did most damage inside the paint.

Nowitzki, who plays for the Dallas Mavericks, is a prototypical stretch-4 who changed the way teams looked at the position with his rare combination of size and shooting touch.

He led the Mavericks to a championship in 2011 and is widely considered one of the best players of his generation.

The power forward position has come a long way since its inception, and it will be interesting to see how the position continues to evolve in the years to come.

What Are the Different Personal Fouls (PF) in Basketball?

In basketball, there are two types of fouls: defensive and offensive. Defensive fouls occur when a player makes contact with an opponent to prevent them from scoring or gaining an advantage.

For example, a common defensive foul is called a blocking foul, which occurs when a player illegally moves into the path of an opponent trying to shoot or drive to the basket.

On the other hand, offensive fouls happen when a player uses their body to push or charge into an opponent.

On the offensive side, one type of foul is called an illegal screen, when a player sets a moving screen on an opponent without giving them enough time to react.

Another popular types of basketball fouls that are not personal are carry and reach-in-foul.

How Many PFs Happen per Game (on Average)?

In 2022, there are roughly 19 personal fouls per NBA game. This number can vary depending on several factors, including the team’s style of play and the size and skill level of the players.

For example, some teams tend to be more aggressive than others, resulting in more fouls being called or committing more themselves.

Additionally, some players are more physical on the court, leading to more personal fouls than others.

As we alluded to earlier, today’s NBA is evolving into a perimeter-oriented league, which has resulted in a decrease in the overall number of fouls being called.

With the new rules and emphasis on three-point shooting, players are now spreading out more on offense, and less contact is taking place around the basket.

Overall, it is clear that high-level basketball games will always have some element of physicality involved, making it crucial for refs to be consistently vigilant when enforcing the rules and monitoring player behavior.

Whether watching at home or a live game, understanding this figure provides critical context for interpreting any individual game’s outcome.

What’s the Difference Between Personal vs. Team Foul?

There are several key differences between personal fouls and team fouls in NBA basketball.

First, while both refer to violations of the sports’ rules, personal fouls refer to infractions committed by individual players.

In contrast, team fouls refer to the total number of individual fouls committed by all players on a single team in a given quarter.

One key difference between these two types of fouls is that team fouls often result in a penalty known as the “bonus” penalty.

Once a team has reached five team fouls within one quarter, the opposing team is then awarded free throws on any subsequent individual foul committed by that same team.

This bonus penalty exists because it gives teams a solid incentive to avoid committing excessive personal or team fouls during gameplay.

After all, each individual or team foul allows the opposing team to score points and gain a competitive advantage over their opponents.

What Does PA Mean in Basketball?

PA, or points against, is a statistic in basketball that measures the number of points a team surrenders to its opponents.

This stat is important because it can reveal how well a team plays on defense.

What Does TO Mean in Basketball Stats

TO, or turnovers is a statistic commonly used in basketball to measure how well players and teams can protect the ball.

When players “turn the ball over,” they are essentially gifting the opposing team an extra possession, giving them additional chances to score.

Factors that contribute to TOs include bad passes, steals by the other team, and inbounding failures. While having more TOs than your opponent may not always be harmful, it is generally considered an indication of poor ball protection and control.

As such, basketball coaches will often focus on minimizing TOs as one strategy for improving their team’s performance on the court.

Ultimately, tracking TOs over time can help basketball players and coaches better understand where improvements need to be made to be more successful.

What Does C Stand for in Basketball

In basketball, the “C” usually stands for the center. This is the tallest position on the court, and players who occupy this position are typically responsible for protecting the basket and rebounding missed shots.

The center can be the most dominant position on the court, as their size and strength can give them a significant advantage in the paint.

However, many “small-ball” lineups have become popular in recent years, meaning centers play on the perimeter.

As a result, the modern center needs to be able to do more than play defense and grab rebounds; they also need to knock down shots from beyond the arc.

Are Basketball Shoes Good for Netball? [Here’s What The Pros Say]