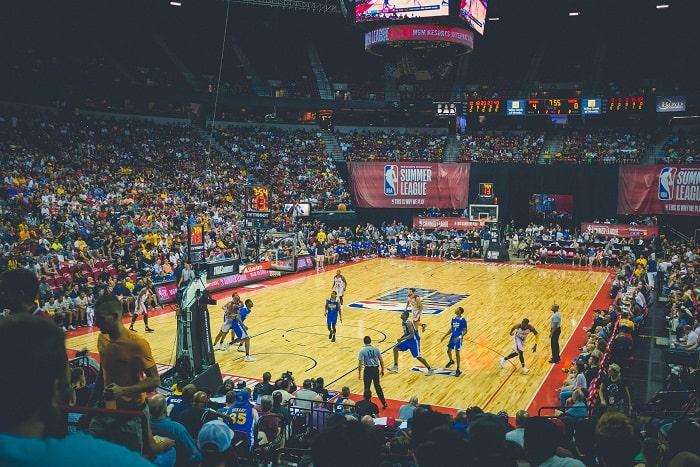 As basketball evolved over the years, so too have the rules that govern it. One such rule is the implementation of quarters.

Why did this rule come about in the first place?

Like many things in life, it all comes down to money. When James Naismith invented basketball, he divided the game into halves, and each half was 15 minutes long.

As basketball grew into a business, there became a greater need to maximize profits. Therefore, organizers implemented rules to:

By dividing the game into four distinct sections, it helped to keep both players and fans engaged. So it’s a win-win for everyone involved.

So, how many quarters are there in a basketball game?

A typical basketball game is four quarters of 12 minutes each. That’s 48 minutes of playing time, not counting timeouts and other breaks.

But that’s not all. Read on for more!

How Long Is a Quarter in The NBA? How Many Quarters Are There in a Basketball Game?

In the National Basketball Association, each quarter is 12 minutes long, and there are four of them in total. There is a short break between the first and second quarters, and a more extended break at halftime.

In the league’s early years (1951), games were divided into 12-minute quarters.

The shorter quarter length was initially adopted to accommodate television schedules. However, it also made games more fast-paced and exciting.

Today, the 12-minute quarter remains an integral part of the NBA experience. In total, a basketball game could turn out to be way too long for a first date.

How Long Is a Quarter in High School Basketball?

A quarter in high school basketball is eight minutes long. This may not seem like a lot of time, but it can feel like an eternity when you’re out on the court.

The game’s pace is often quite frantic, and there are usually a lot of stoppages in play.

As a result, quarters can often feel much longer than they are. But, of course, this can vary depending on the teams involved and the level of competition.

How Long Is a Quarter in International Basketball?

The length of a quarter in international basketball is 10 minutes. Olympic quarter length or international rules differ from NBA by 2 minutes.

In the NBA, each team has 24 seconds to get a shot off, while each team has 30 seconds in international play. The extra 6 seconds may not seem like much, but it can make a big difference in the game’s flow.

If you want to learn more about the difference between NBA and International Basketball rules, watch this video:

Why Are There Breaks in Between Quarters?

There are a few reasons for the breaks in between quarters in basketball.

In all seriousness, the breaks in between quarters provide a much-needed respite for players and fans alike. They give everyone a chance to take a break from the action, regroup, and prepare for the next quarter.

Why Are NBA Quarters 12 Minutes?

The NBA quarters are 12 minutes long because that’s the length of an official basketball game.

The game is divided into four quarters, each lasting 12 minutes. At the end of each quarter, the teams switch baskets and take a break.

The 12-minute quarters give both teams enough time to mount a comeback, preventing the games from getting too long.

Of course, there are always exceptions, like when a team goes on a big run or when there’s a close game in the fourth quarter.

Are There 4 Quarters in College Basketball?

No. Any true college basketball fan knows that there are two halves in a game, not four quarters.

This traditional format has been in place for generations, and it is one of the things that make college basketball so unique.

So next time you’re watching a game, remember that there are only two halves – not four quarters.

Are There Different Quarter Lengths In College Basketball? (Why?)

Yes, there are different quarter lengths in college basketball. Each half is 20 minutes long in the NCAA, and each team has two timeouts per half.

In the NIT and CBI, each half is also 20 minutes long, but each team only has one timeout per half. Therefore, there are media timeouts at the first stoppages under 16 minutes and 4 minutes in each half.

As for why college basketball uses halves instead of quarters, that’s primarily due to tradition. In the early 1900s, games were divided into halves.

It wasn’t until later that the quarters format became more popular. However, college basketball has always stuck with the halves format.

What Causes An Interruption In Basketball? (What Stops The Clock?)

The clock stops in any “dead ball” scenario. Dead ball scenarios occur when:

Don’t forget. There is also official stoppage time between quarters, media timeouts, or halftime. These don’t qualify as “dead ball” scenarios, however.

Is It Basketball Quarters or Periods?

Let’s settle this once and for all: it’s quarters, not periods. Of course, some people will argue that the term “period” is more accurate, since each quarter equals one-fourth of the game.

But that’s not how basketball fans have always talked about the game.

The term “quarter” dates back to the early days of basketball, when the game was divided into ten-minute sections.

Even though the length of each quarter has changed over time, the term has remained in use.

And there’s a good reason for that: it’s simply more descriptive.

When you say that a team is up by “two points at the end of the first quarter,” it’s clear that you’re talking about the first part (of the first half of the game).

If you said that a team is up by “two points at the end of the first period,” it’s not as clear what you’re talking about.

So next time you’re talking about basketball, use the term “quarter” – not “period.”

How Many Extra Quarters Are There in a Basketball Game? How Long Is Overtime?

If you’re ever wondering how long a basketball game can last, the answer is: as long as it takes to break the tie.

If the score is still tied after that, then the game will go into a third overtime period, and so on.

There is no limit to how many overtime periods are in a basketball game.

How Long is College Basketball Halftime?

According to the NCAA, college basketball halftimes will last no longer than fifteen minutes.

That may seem like a long time when you’re sitting in the stands, but it’s a tight turnaround for the team’s trainers and coaches.

During halftime, players can leave the court to change into dry clothes and receive medical treatment if necessary.

They’re also allowed to drink water or sports drinks to stay hydrated and relax after performing multiple jump shots on the court.

Coaches use halftime to make strategic adjustments and give their players a chance to catch their breath before heading back onto the court.

How Many Minutes Are There In a Basketball Game?

Game length will vary depending on the level of basketball.

There is a 15-minute halftime break, and two-minute breaks at the end of the first and third quarters. In the event of overtime, each overtime period is five minutes long.

A college basketball game will generally last between two and three hours.

However, the actual length of a college basketball game can vary depending on several factors, such as the number of timeouts each team takes and the number of fouls.

Any given international basketball game lasts for a minimum of three hours.

This includes the time for each team to have two 20-minute halves and a 10-minute halftime break.

In addition, there are usually several stoppages of play throughout the game, including timeouts, free throws, and injuries.

﻿There are a few subtle differences between the WNBA and the NBA regarding the game clock, but the overall structure is the same.

So you can expect a WNBA game to be slightly shorter than an NBA game.

Why Do Basketball Players Jump When They Shoot? [2023]