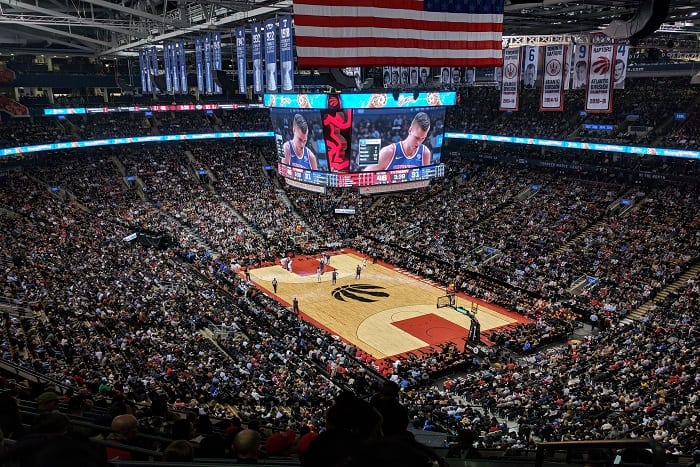 Basketball is one of the most historic games in the world. It may look confusing to someone who has never watched it before.

The games rules can often look confusing, but it is simple to understand with a bit of explaining. The first major question new fans have is usually about the length of the game.

But there are often many more questions that come up when you look at the timings of basketball games.

This helpful article should be able to answer pretty much any question you have on basketball and help to understand the game a lot better.

How Long Is a Basketball Game?

Basketball games vary in length. But the most popular basketball league, the NBA, uses four quarters of 12 minutes each.

The NBA also has specific rules for overtime. Overtime periods last for five minutes. Overtimes continue to be five minutes even if multiple are needed.

You may notice that basketball games often have two clocks. They have the game clock, which counts down from 12 minutes for each quarter. And this number is the same both in the USA, but also in the highest paying Euro leagues.

But there is also the shot clock. The shot clock is a determined amount of time that one team is allowed to possess the ball for before they must shoot.

In the NBA, you have a 24 second shot clock. This clock resets every time a shot is made, or there is a change of possession.

For some more of the rules of timings of basketball games, check out this useful link on some of the Rules of Basketball. But yeah, in general a basketball game could be lengthy for a first date.

Why Does The Clock Keep Stopping During NBA Games?

There is a variety of reasons why a clock might stop in an NBA game. It might be because:

How Long are Fiba Basketball Games

Fiba has always wanted to differentiate its game from the NBA. The rules are very different for the timings of a FIBA game.

FIBA rules may not be as well known as NBA rules, so you should take a look at FIBA’s video below, which details some of the timing rules of FIBA.

What Adds to the Time for Playoff Games?

While NBA playoff games are not any longer on the actual clock, usually the viewing time will be longer than a regular season game. Sadly, for NBA fans, this is not because the viewing is any better.

How Long Does a Basketball Game Last in the NCAA?

College Basketball has a completely different timing system to the NBA and FIBA. The NCAA does not use quarters in their games. NCAA basketball games are two halves that last for 20 minutes each.

There is not really much explanation as to why the two are different.

How Long Is A High School Basketball Game?

The length of high school basketball games is decided by the National Federation of High School Associations.

They state that high school basketball games will be made up of four quarters that last for eight minutes each.

High School games tend to be shorter than NBA games because high school athletes don’t have the same stamina as professional athletes.

Much like NBA and FIBA games, high school games tend to run for around an hour and a half because of all of the stoppages, and the 20 minutes for Half time.

What Is The Longest NBA Game?

The longest ever NBA game took place all the way back in 1951. The game took place between two teams that no longer compete in the NBA, the Indianapolis Olympians and the Rochester Royals.

Incredibly, the game time was 78 minutes, as it went into six overtimes before the Olympians came out victorious.

The final score was 75-73, with the Olympians scoring 2 points in the sixth overtime while not allowing the Royals to score at all.

How Do NBA Games Take Place?

NBA games make up an 82-game regular season. This regular season ranks the 15 teams in each conference, with the top 6 going straight to the playoffs.

The seventh to tenth best teams are entered into a play in competition, which produces two additional teams into the playoffs.

When Does The Clock Stop?

The clock tends to stop when the ball goes out of bounds. This is because it usually takes at least a few seconds to get the ball back into play.

The clock also stops for timeouts, injuries or commercial breaks. There are lots of different reasons why the clock might stop.

How Long Does A Youth Basketball Game Last?

Youth basketball games tend to vary in their length, depending on the specific league rules. There are lots of youth leagues who use the same system as the NCAA for their timings.

This means two halves of 20 minutes each.

But to adjust for youths who may not be able to play for as long as older players may do, youth basketball games ted to use a running clock.

This means they only stop for timeouts of halftime. It makes the games shorter. Most leagues also have a shorter halftime, with halftime tending to be around 10 minutes for youth basketball games.

How long Is A Women’s Game In College Basketball?

Women’s college basketball games tend to last for approximately two hours in length. The actual game time is split into four quarters of 10 minutes each.

This is still a pretty new concept in Women’s NCAA basketball, as they used the same two halves of 20 minutes up until 2015.

How Long Is A Basketball Game In Junior, Mid And High School

Junior high school games tend to last for around an hour and a half. The actual game time in total is usually only 24 minutes.

This is split into four quarters of six minutes. Some states are different and have quarters that last for eight minutes each.

High school games tend to for around 2 hours. The actual game time is usually four quarters of eight minutes.

Some states use quarters that are 10 minutes long, but 8 minutes tends to be the normal length.

Interestingly, high school basketball does not have a shot clock. This means players can have longer on the ball without needing to shoot, even though they risk getting penalty because of carrying the ball.

The rules are set by state, so can vary throughout the country.

Both Junior and High school basketball have a mercy rule which affects the clock.

If one team is ahead by a certain number of points at half time, the second half will be played with a running clock, to make the game quicker. This is a rule used commonly in high school sports.

The main reason why playoff games usually last longer than regular season games is due to commercials.

TV networks know that more people will watch NBA basketball in the playoffs rather than in the regular season.

So, they tend to run more adverts. Often these additional commercials will take the total time of these games up to around three hours.

How Long Is A Basketball Quarter?

Basketball quarters usually vary depending on the different leagues that are involved. NBA quarters tend to last for 12 minutes across all divisions.

Quarters in different basketball games are usually either 6,8,10 or 12 minutes per quarter. But it really varies from the competition or even which state the game is being played in.

What Are Ways The NBA Can Speed Up The Game

The NBA is already a pretty high paced game, but fans do still often complain about how long games take.

Especially for soccer fans, the idea of a 48-minute game taking 3 hours seems very strange. The huge number of stoppages can be frustrating to fans, but there are definitely things that the NBA can do to speed it up.

One of the major things they could do is reduce commercial breaks. These often lead to a lot of stoppages.

But the NBA would never do that because it would most likely have negative effects on their bottom line.

One of the other things they could do was to reduce the number of timeouts that each team are allowed.

In the NBA, the clock stops when a timeout is taken, and each team has seven timeouts. Reducing the number of timeouts can be a good way to speed up games. The NBA could also try:

How long is a basketball game in the Olympics?

Olympic basketball will look very different in Tokyo, compared to the NBA. The game is shorter in length.

Olympic games use FIBA rules, so it means that Olympic basketball games only last for 40 minutes, which is split into four quarters of ten minutes each.

This gives NBA players an advantage, as they are used to playing for even longer.

If you wanted to check out some more of the differences between Olympic basketball and the NBA, this useful link should help.

How to Remove Basketball Pole? 10 Easy Steps to Follow!