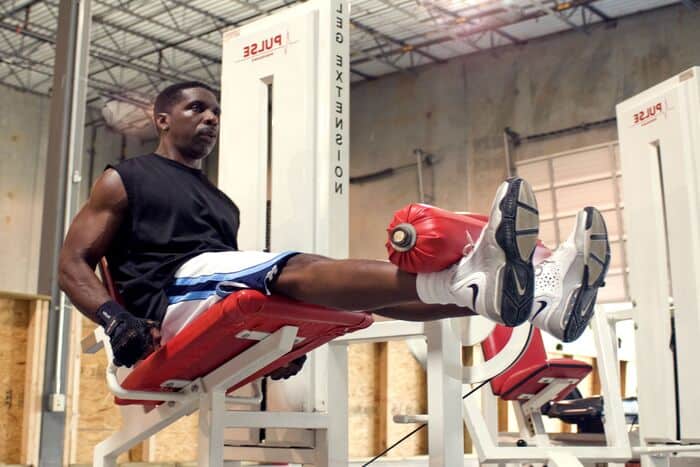 The NBA season is a long and grueling one.

Players perform at a high level for 82 games, and even more if they make it to the playoffs.

With so much on the line, it’s no wonder that NBA players take their fitness seriously and try to stay in shape year-round.

So, do NBA players work out during the season?

Yes, they do! NBA players continue to work out even when they are in the middle of a demanding 82-game schedule.

This blog post will explore why they do and explain how some top stars stay in shape.

Should You Exercise During A Basketball Season?

Yes. Basketball players should exercise by focusing on:

Do Pro Basketball Players Lift Weights During the Season?

Pro basketball players lift weights during the season to maintain their muscle mass and prevent injuries.

Although they may not lift as heavy as they do in the off-season, they still need to work out to stay in shape.

Why Is Strength Training Important?

The primary purpose of a strength training program is to reduce the occurrence and severity of the injury.

Basketball is very demanding physically, so making the muscles, ligaments, and tendons stronger will lessen an injury’s occurrence and/or severity. That’s why you often see players wearing various types of sleeves and rubber bands.

This will also improve their performance on the court. The stronger your player is, the more force they can produce, they become faster, etc.

Another critical point is that strength can quickly diminish in players, which means your team is getting weaker with each passing day.

Therefore, players must maintain a strength training regiment to keep the gains they built during the off-season training.

Basketball players require a combination of physical fitness and skills to thrive on the court.

In addition, they typically make around 45 jumps per game. Overall, basketball is a highly challenging and physically taxing activity that requires tremendous athleticism and stamina.

To start, they must run faster than their opponents to outmaneuver them and gain an advantage. In addition, they must have strong balance and agility to both avoid and withstand physical contact during the game.

Additionally, they need to jump higher and faster than their adversaries to secure rebounds or block shots.

Overall, all these elements require a high fitness level characterized by both aerobic and anaerobic endurance.

There are several reasons why NBA basketball players focus on skill-building beyond players’ moves.

Workout results do not always carry over into games if players are not fully prepared.

In addition, they are teaching players the reasoning (or the “why”) behind moves that help them better understand the game and make strategic decisions.

NBA players focus on skill-building by hiring a special player development coach. These coaches possess the knowledge and have solutions for problems they’ll see on the court.

These coaches will plan workouts after identifying a weakness that needs improvement or a skill that needs perfecting.

They’ll look over the film, analytics, and talk to people in the circle, such as the head coach, physical trainers, and player development coach.

They then incorporate specific and tailored drills to the player’s needs into their training regimen.

Do NBA Players Work Out Every Day (How Much Do They Workout)?

Yes, as long as it’s not a game day. In the thick of the NBA season, most players work out once or twice a day.

They have to maintain their strength and conditioning to play at a high level for 82 games.

Their workout routine usually starts with a morning session that focuses on strength and explosiveness. Then, the players will do various exercises, including squats, lunges, and bench presses.

They’ll also work on their vertical jump and speed drills. Then, in the afternoon, they’ll focus on basketball-specific drills. This might include shooting or dribbling drills or finishing drills around the rim.

Kobe Bryant famously shot 2,000 jump shots a day during his NBA career, often spanning over 6 hours in a day.

While most players don’t put in that kind of work, they understand the importance of honing their skills and staying sharp.

How Do NBA Players Use Cross-Training?

Many players often supplement their workouts with yoga or Pilates sessions. This helps them stay flexible and injury-free during the season.

Players also use cross-training to build cardio endurance and strength.

For example, players like Damian Lillard, Kyle Kuzma, and Carmelo Anthony mix things up. They’ll go to a boxing gym and spar with some professionals.

Many NBA stars use boxing as a means to build strength and speed, as well as hone their hand-eye coordination.

By focusing on specific skills used in boxing-such as powerful punches, defensive footwork, and sharp reaction times, NBA players can improve their performance on the court in several ways.

Many top NBA players do boxing as a go-to training method, whether they’re looking to become more physical with opponents or increase their speed and agility.

Let’s go through Andre Iguodala’s routine to give you an idea of what a typical day looks like for an NBA player.

Iguodala is a 14-year NBA veteran who has played for the Philadelphia 76ers, Denver Nuggets, and Golden State Warriors. Andre Iguodala’s daily routine begins with a nutritious breakfast and a two-hour workout session.

Iguodala starts his workout with a ball handling series, focusing on his off-hand.

He then moves on to stretching before spending an hour and a half doing intense shooting drills (500+ makes). After shooting, Iguodala lifts legs/core twice a week and upper twice a week.

How Many Days a Week Should a Basketball Player Workout

Typically, these athletes work out 5-7 days per week, incorporating weights, cardio exercises, and drills into their training sessions.

There is no single “right” number of days when designing a workout regimen for basketball players.

The precise frequency and intensity level that works best will depend on various individual factors, including the player’s current fitness level, experience, and game schedule.

Players wishing to excel in this demanding sport regularly commit to an intense physical training schedule.

Whether working out every day or only several times per week, basketball players should always take adequate time for rest and recovery in between training sessions. By doing so, they can maximize their gains while minimizing the risk of injury or burnout.

Many athletes believe that they can take a break from their workout routine during the season, but this is a mistake.

An in-season workout routine is essential for keeping your body in peak condition and preventing injuries. The key is to focus on the major muscle groups and the most injury-prone areas.

For basketball players, they should focus on the legs, hips, core, and upper torso. Additionally, they should pay attention to the ankles, knees, lower back, and hands.

A limited number of sets and exercises, with minimal rest intervals, will help you get the most out of your workouts in the shortest amount of time.

The philosophy for in-season workouts should be quality over quantity–focus on perfecting your form, and don’t try to push yourself too hard.

By staying on top of your workout routine, you’ll be able to perform at your best all season long.

Here are some sample exercises that a basketball player can do during the season:

Why Do Basketball Players Wipe Their Shoes? [2 Odd Reasons]

Can NBA Players Be Traded While Injured? [2023 Full Answer]