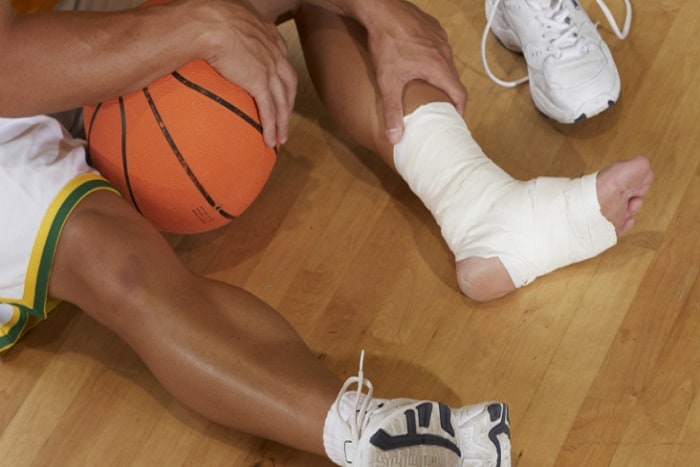 The NBA trade deadline is coming up, and many teams are looking to make deals.

One question that has been on people’s minds is: can NBA players be traded while injured? The answer is yes, NBA teams can trade injured players.

However, there are some things to keep in mind when making a trade involving an injured player.

This blog post will discuss the rules around trading injured players in the NBA. We will also shine a light on the rules and restrictions of the NBA’s Collective Bargaining Agreement.

Can NBA Players Be Traded While Injured?

Yes. Injured players can be traded as long as the other team is aware of their injuries.

Each team involved goes a detailed process to examine if players are medically compromised.

All traded players must pass physical examinations with their new teams. Of course, this makes complete sense when you’re trading assets worth millions of dollars.

If a team decides they do not want to go through with the trade, they have the right to cancel it based on the results of a physical examination.

However, if the team acquiring the injured player is willing to waive the player’s requirement to pass his physical, then the trade can go through.

In other words, a team can’t just send an injured player to another team without the receiving team’s knowledge or consent. Both teams must agree on the trade, and the team receiving the injured player must be aware of his injuries.

For example, the Philadelphia 76’rs recently sent a brittle Ben Simmons to the Brooklyn Nets in a blockbuster deal to acquire James Harden.

This season, Simmons has yet to play a single game due to a lingering back injury. He also recently said he’s struggling with mental health issues, which could be flaring up his back.

The Nets knew about Simmons’ injury and were willing to take him on the risk anyway because they believed he could be a key piece of their championship puzzle. So far, it’s looking like Philly won that trade.

Here is some commentary on the specifics of the Ben Simmons situation:

The NBA has a set of rules that govern how trades can occur. These rules are collectively known as the “Collective Bargaining Agreement” or CBA.

The CBA covers everything from player salaries to free agency to, you guessed it, trades.

Can an NBA Player Refuse to Be Traded?

An NBA player can refuse to be traded under particular circumstances. A no-trade clause in an NBA contract allows players to veto trade proposals.

No-trade clauses are rare and are typically only included in contracts for veteran players who have spent a significant amount of time with a particular team.

Some historical examples of players who had no-trade clauses were Carmelo Anthony, LeBron James of ’16-’17 Cleveland Cavaliers, and Dirk Nowitzki of the Dallas Mavericks. As of 2021-2022, no players have a no-trade clause in their contracts.

Similarly, an NBA player can refuse to be traded, as they have certain rights under the “Bird rights” rule.

This rule allows players who have played for a team for at least one year and are seeking free agency to veto any potential trade deals from happening.

One-year bird rights apply in certain situations, such as when a free agent has signed just a one-year contract but retains his Bird rights when he becomes eligible for free agency again.

In this case, the player can still choose to be traded to another team if he wishes, but he must consent to the deal.

In general, however, Bird rights allow NBA players more freedom and control over their careers, giving them more say in where they go.

When Can an NBA Player Be Traded?

Typically, teams can engage in trades between the start of the regular season and the NBA’s trade deadline in mid-February.

In addition, teams who do not make it into the playoffs at the end of the season will also have an opportunity to trade players if they choose to do so.

Beyond these general time restrictions, playoff teams can start making deals once they get eliminated from playoff contention.

No trades can occur during the playoffs themselves, nor during the moratorium period immediately following the conclusion of free agency each year.

The moratorium lasts until all draft picks have finished going through the evaluation process, after which teams are free to begin making deals again.

Do NBA Players Still Get Paid if They Are Injured?

Yes, NBA players are entitled to full compensation even when injured, as long as their injuries are sports-related.

Many players have what are known as “guaranteed contracts,” which means that they are guaranteed to receive their salaries in full regardless of how many games they play.

Examples of such players include Zion Williamson, who is currently away from the court due to a recurring foot injury.

In fact, at this point in his career, Zion Williamson has missed more games than he’s played.

Despite his injury and time away from the game, Williamson will continue to get paid according to his contract.

Overall, NBA players are well protected against losses due to injury, ensuring that they can focus entirely on their performance on the court without worrying about financial concerns.

The NBA 60-Day Trade Rule is a restriction placed on trading among teams.

Under this rule, if one team acquires an individual player in a trade, they can trade that player right away in exchange for another player.

However, if teams want to include the newly acquired player in a larger trade deal, they must wait at least 60 days.

Overall, the rule encourages fair and equitable trades within the NBA community.

Can an NBA Player Be Traded Twice in One Season?

Yes, absolutely. An NBA player can be traded twice in one season. Many high-profile trades involved NBA players moving teams multiple times in a single year.

Guard Luke Ridnour was traded four times in two weeks during the 2014-2015 season. He was first sent from the Orlando Magic to the Memphis Grizzlies as part of a deal that saw forward Jeff Green go to the Los Angeles Clippers.

Just days later, Ridnour was then traded from Memphis to Charlotte. Then from Charlotte, he was traded to the Thunder. Finally, the Thunder traded him to Toronto (Atlantic division), where he was eventually waived.

A single team can’t trade a player twice in one season in the NBA. This is due to a rule known as the no-reacquisition rule, which states that once a team trades a player away, they cannot reacquire him during the same season.

Additionally, if the team makes another trade involving that player between seasons, they cannot bring him back on their roster until the end of the next season.

One exception to these rules is if the traded player is waived by his new team and remains unclaimed by any other teams, at which point he can be claimed by his original team and rejoin them on their roster.

While this rule helps preserve competitive balance in the league and prevents teams from quickly obtaining returning players, it does cause some issues for both players and owners alike.

Nevertheless, these limitations serve as an essential measure against unfair trading practices for most NBA players (Asian players too) and teams.

Can Two-Way Players Be Traded?

Yes, two-way players can be traded, though they are subject to certain restrictions. In general, such players must sign a new contract with their team after being traded, which usually includes a 30-day waiting period.

While two-way players may seem like an insignificant component of a more significant trade deal, in some cases these types of players are used to sweeten or finalize the transaction.

For example, adding in a young player on a two-way contract may allow the team receiving the deal more flexibility and negotiating power.

Similarly, teams looking to shed salary may offer up one of their players on a two-way contract as part of the trade package to offload their financial obligations.

Two-way contracts confer certain benefits and limitations on participating players and teams alike. NBA teams can still use them in trades with relative ease.

Do NBA Players Workout During The Season? [NBA Pro Tells All]

Do NBA Players Wear Mouthguards? [We Didn’t Expect This]